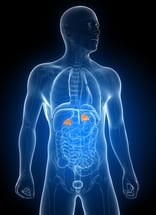 Addison's disease is a rare endocrine disorder in which the adrenal glands do not produce enough steroid hormones for proper bodily function. In people with Addison's disease, the adrenal glands do not produce enough cortisol, and in some cases, the adrenal glands also fail to produce enough aldosterone. These hormones are essential to body function. Cortisol affects the body response to stress, the body's ability to convert food into energy and the immune system's inflammatory response. Aldosterone helps to maintain the balance of sodium, potassium and water within the body. Both hormones also help to regulate blood pressure. When these hormones are at insufficient levels within the body, distressing and dangerous symptoms may occur.

Addison's disease, also known as adrenal insufficiency or hypocortisolism, is most common among people between the ages of 30 and 50 and affects men and women equally. Left untreated, Addison's disease can be life-threatening.

Addison's disease is defined as primary adrenal insufficiency and occurs when the adrenal glands are damaged and cannot produce enough of the hormone cortisol and often the hormone aldosterone. The exact cause of the adrenal gland damage is unknown, but it may be the result of an autoimmune disease. Other causes may include:

Common symptoms of Addison's disease include:

Some patients may also crave salt due to the uncontrolled loss of sodium. People with Addison's disease may also experience hyperpigmentation, or darkening of the skin, on existing scars and the elbows, knees, knuckles,toes and lips.

An Addisonian crisis is considered a medical emergency and the patient should be transported to a hospital immediately. During an Addisonian crisis, low blood pressure, low blood glucose, and high levels of potassium can be life threatening. This normally occurs in individuals with an undiagnosed case of Addison's disease, or in a patient with Addison's disease who may be suffering from an infection or who has recently ceased taking medication without doctor approval.

In the beginning stages, Addison's disease may be difficult to diagnose. If after reviewing the patient's symptoms, the doctor suspects Addison's disease, the following tests may be performed:

These tests are performed to analyze the function of the pituitary gland and its ability to produce hormones.

The treatment of Addison's disease usually consists of replacing the hormones that are not being produced, such as hydrocortisone and fludrocortisones. The patient must maintain this medication regimen for life. The dosage of hormones may need to be altered for patients who undergo surgery, experience any other type of injury or illness, or women who become pregnant.

Because of the possibility of severe complications associated with this condition, people with Addison's disease should always carry identification stating their condition in case of an emergency. A medical alert tag should notify emergency medical personnel of the need to inject cortisol if the person is found severely injured or unconscious.