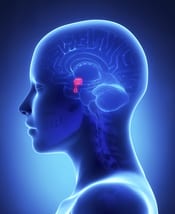 Hyperprolactinemia is a condition involving an excess of the hormone prolactin in the blood. Prolactin is secreted by the pituitary gland and is normally found in very small quantities in men and women. It is responsible for breast development in girls and milk production in women after childbirth, so levels typically only rise during pregnancy.

Many symptoms of hyperprolactinemia are related to prolactin's effect on the production of the sexual and reproductive hormones and so are gender specific. Other symptoms may be the result of a growing pituitary tumor which exerts pressure on nerves or blood vessels. Symptoms of this disorder include:

Diagnosis of this disorder involves a blood test for prolactin blood levels as well as a complete physical examination and medical history. Thyroid function may also be tested. If a tumor is the suspected cause of the hyperprolactinemia, a magnetic resonance imaging (MRI) scan may also be administered in order to locate the tumor and monitor its growth.

The goal of treatment for hyperprolactinemia is to restore pituitary gland function and return prolactin levels to normal. This is primarily accomplished with medication. Medication is taken until prolactin levels return to normal or until the patient becomes pregnant, when it must be discontinued. Surgery is performed only in cases where the condition is caused by a large pituitary tumor or where medications are ineffective or cannot be tolerated. Repeated MRI scans may be administered to evaluate the effectiveness of treatment.

Although medications for hyperprolactinemia are initially prescribed in low doses and gradually increased, patients may experience side effects, including:

It is important that patients refrain from abruptly discontinuing these medications, since such action is likely to result in the recurrence of elevated prolactin levels. Treatment for hyperprolactinemia may cause fluctuations in the levels of other hormones in the body, particularly when the patient has undergone surgery, and long-term treatment with hormone replacement may be necessary.

Other complications of hyperprolactinemia are related to the growth of the tumor causing the disorder. These may include blindness, osteoporosis, and infertility.